35 ha property in central Sweden. Local area of Järna is considered a network of communities. Volunteership was based atthe farm, but included activity in many other places in Järna.

This project was extremely diverse and quite challenging, as we were the first generation of volunteers in this community. I led our trio in support of Transition Järna (the hosting organization), and other local grassroots initiatives. There were five different projects: Charlottendal Gård (where we also lived), Lilla Bullerbyn (Kindergarten), Föreningen SOFIA (Social aid organisation), Cykelkultur (bicycle service and café), and Under Tallarna (community supported agriculture, CSA). Additionally we participated in the creating and hosting of multiple events, such as parties, fundraiser and ceremonies. Our responsibilities included caretaking of animals and gardens in the community, construction work, as well as working with the community to develop new social structures (work days, community meals and seasonal events).

The value of the volunteers lay not only in helping the community and other projects with daily chores, but also developing their level of inclusion and openness. With volunteers present in a place, processes began to unfold which made the ecovillage more attractive and accessible to external individuals. This resulted in five new individuals joining the community as full or part-time residents. The volunteers also played a vital role in the establishment of the community collective with an additional four residents, a community temple for healing activity, and a new shelter in the woods for the children to play in. The largest physical imprint of our activities became the Base, which will serve as the home for the next generations of volunteers.

This project was done in collaboration with my University, to which I reported my findings as action research, after my time as a volunteer. I produced two documents: Catalyzing community through a voluntary taskforce; and Designing with Diversity: A Case Study of Charlottendal Gård.

Additionally 2 short videos were produced on the project:

This building is a beautiful addition to the community of Charlottendals Gård. It is situated on the north side of the central pond, receiving lots of sun light. From the Base one has a view of the pond, barn, some houses and animals roaming the fields. The structure sits on the edge of the forest, bringing in much of the natural environment to the charismatic timber house. The structure was prefabricated in Estonia by Tender Ehitus, who also transported it and raised it on a premade foundation. The interior was fininshed by us volunteers in association with friends, and led by specialists Eveline Mimpen (Deep Green Design) and Julian Baw (Folktek). We moved into the Base in September, and the work continued with building necessary facilities, such as the bathroom (finished by the 2nd generation of volunteers in 2019) and the outdoor kitchen (still in progress). 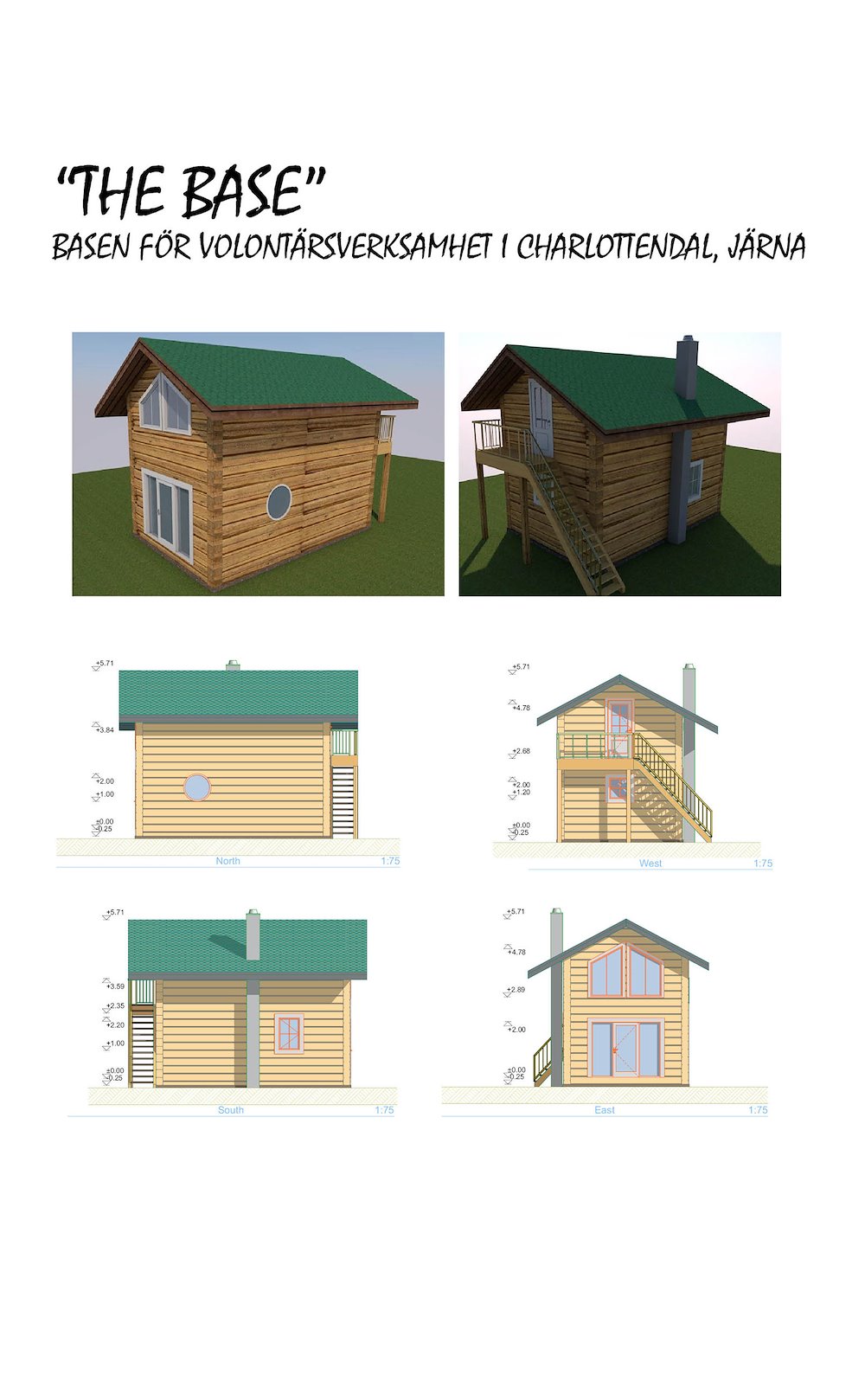 Commentary on my performance by team member Noora Puolamaa (on the left):

I worked with Peter for about a year as part of the volunteering programme for Tansition Järna and Charlottendal’s Farm, together with Svetlana. Peter took on a role of builder and coordinator of volunteer activities.

It was a pleasure to work with Peter. He is generous with his time and energy and very committed to his work. I especially

consider him well suited for coordinating

I found his personal strengths to be:

Commentary on my performance by team member Svetlana Rodionova (in the middle):

I worked with Peter and Noora for one

year and I consider us as a great and successful team also because of Peter taking the leading role.

He was showing the next list of qualities that I reckon important for this position:

- Connecting to the place and projects

- Listening to the team and making deci-

- Ability to see the whole picture and how

different projects we were involved in can

- Ability to see your potential and passion